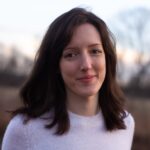 I started making interactive stories in childhood, when I would script, film, and make my siblings act in short, terrible movies. Eventually I switched mediums, earning a B.A. in English while minoring in computer science, and for a few years channelled my narrative energy into work as a non-profit grant writer and development officer.

I earned an M.A. in Digital Humanities and a Ph.D. in English because I wanted to explore the deep structure of interactivity—how humans have always spun our cultures out of narratives and how digital spaces and technology shape and invoke that process in unexpected ways.

While studying everything from Python coding conventions to 19th-century American poems, I discovered that texts invite reader engagement and code invites user interaction in much the same way, and I’ve spent the last several years experimenting in the overlap. I’ve found that digital is less the state of being encoded and more the process through which any program, poem, or piece of technology asks for more than surface interaction. I see digital as the expression of a very old idea—the belief that human culture is the result of dynamic exchanges that are more than the sum of their parts.

Recently I redesigned traditional stories such as Moby-Dick as digital experiences, collaboratively created an augmented reality app for a 19th-century painting, and turned Emily Dickinson’s unfinished poems into user-centered objects. My work has been supported by Emory University, the Bill and Carol Fox Center for Humanistic Inquiry, and the Andrew W. Mellon Foundation.

I spend my free time exploring parks, gardens, and museums (from the wilds of my living room since 2020), assembling Billy bookshelves from IKEA, and limiting my excess computer time mostly to keep from adopting more dogs than my house will currently hold.

Working Knowledge of HTML and CSS